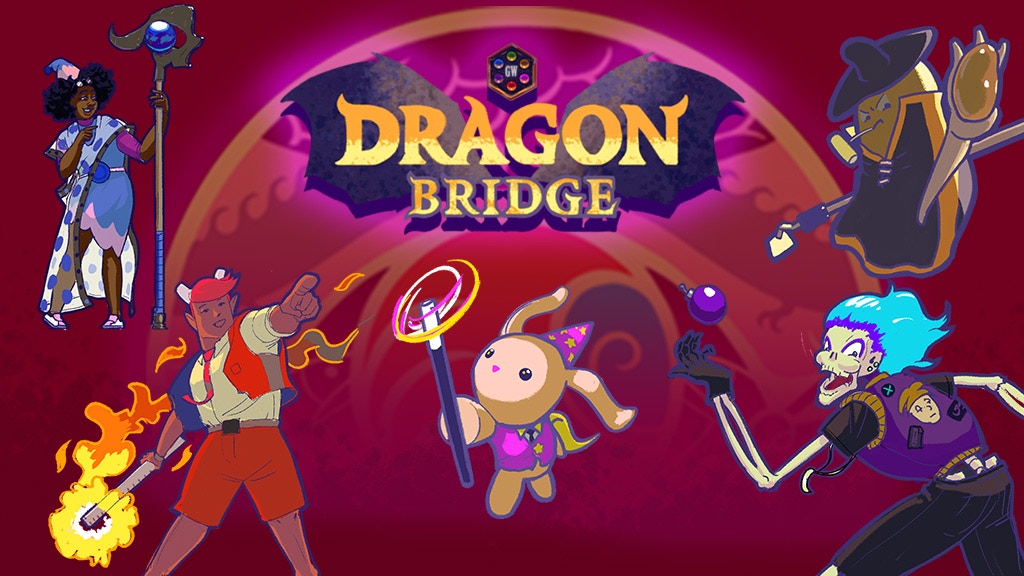 Two wizards engage in an original magic-battle on a bridge guarded by a dragon - all in a super-portable 36-card package!

Latest Updates from Our Project:

Tonight on Twitch.tv at 8PM EST I'll be playing the new prototype of DRAGON BRIDGE's *digital version*! That's right - one has been in development for some time now and it's now at a playable stage. It's still early, so it's not super polished or anything, but it's solid enough to play, and it has online multiplayer!

You can sign up yourself for the new Steam Playtest feature and play Dragon Bridge FOR FREE - you'll just have to get your own opponents. https://store.steampowered.com/app/1443070/Dragon_Bridge/

You can also find the manual here.


Come by: http://www.twitch.tv/keithburgun tonight at 8PM and hang out!


IN OTHER NEWS, Gem Wizards Tactics is doing great! It won an award for BEST GAME DESIGN last month (:O ), and has been adding all kinds of new content and features. I encourage you to come check it out if you have time and like turn based tactical games with a lot of bumping (which Dragon Bridge fans, I'd think, would be into!)

Thanks again, and stay tuned for more news on Dragon Bridge Digital and other cool stuff soon!

Hey hey! We have an amazing Dragon Bridge SUPERSALE happening right now at CoolStuffInc - you can grab copies of the game for just $16! There's a limited supply and they won't last long, so grab your copies ASAP!

So as of now all of the orders should be fulfilled - everyone should have their copies. I hope you're pleased with the quality of the game, which is WAY higher than I originally intended, both in terms of the quality of the components and the number of different items in the box. I'm really proud of it and I hope you're enjoying the game as much as I am!


Here's a few things you can do to help Dragon Bridge succeed as a game:

- Let other people know about the game! Post in your social media circles about it. The easiest way to buy copies is over at coolstuffinc: https://www.coolstuffinc.com/p/305143

- Write some stuff on Boardgamegeek about it! In other threads, and also help us fill out the Dragon Bridge BGG page: https://www.boardgamegeek.com/boardgame/286031/dragon-bridge/


As to what's next: right now we're working hard on a Dragon Bridge DIGITAL VERSION. That should be ready for beta testing in about a month, so stay tuned for that. I personally am really pumped for that, I was playtesting it with Brett Lowey the other day, who is making the digital version, and I actually forgot I was playtesting and just got really engrossed in the game. We'll keep you posted on how this goes.

Thanks so much for Kickstarting, and stay tuned!


PS! My other main project, Gem Wizards Tactics, a turn-based tactics game, is launching on Steam on February 16th! You can check out a bunch of stuff and wishlist it on the Steam page, here: https://store.steampowered.com/app/1360270/Gem_Wizards_Tactics/

Hi everyone! We're sorry for the delay. Orders took a little bit longer to go out than expected, partially because I had a few orders that needed updates to addresses and things like that. But the US orders should have all shipped today, and CA/other orders next week. More news as I have it!

ALSO! Today I played the first ever alpha version of the Dragon Bridge Digital version. It's looking really cool - more news on that as I get it as well.

Thanks for your patience everyone - people in the US will be getting the game as soon as the mail trucks arrive. I'm so excited to hear what everyone thinks of the game.

No big news really -- Dragon Bridge DELUXE EDITION should be hitting all of you by late October still. But I did wanna let you know that those of you who signed up for signed copies will get signed stickers in the mail, somewhere around the same time (I'll be mailing them directly). Doing it any other way would mean that those backers got the game maybe as much as a month later, which doesn't seem worth it. Also this way, you have the signature that you can apply to the game, or not if you prefer to keep the box plain.


I also will have a new PROMOTIONAL CHARACTER that will be made available in some capacity, coming in the next month or so. Stay tuned for news on him soon (I can tell you that he is a BUSINESS DEMON).


Semi-news: I may have a team that's interested in doing a Dragon Bridge digital version -- something that would be very valuable to me -- but they can't get started for a few months, so this would be a ways off. But it is something I am thinking about.


Other than that, while I wait for the shipments to get processed and mailed out, I've been working on my turn based tactics game, Gem Wizards Tactics. Make sure to follow Keith Burgun Games on Twitter to get all of the updates on that, as well as Dragon Bridge news.